Even for a state prone to natural disasters, California's had a catastrophic week.

At least four people have died as a result of wildfires fueled by a heat wave and a blitz of lightning strikes in the state's northern areas. The clusters of fires merged into orange infernos that are creeping up on residential areas, turning neighborhoods into ash and smoldering ruins.
And as tens of thousands of people evacuate to shelters, they're weighing the risk of coronavirus infections after California became first state to surpass 600,000 cases last week.
"Not only are we dealing with Covid, but with also the heat and now the fires," said Cheryl Jarvis, who evacuated to a community center in Vacaville but refuses to go inside for fear of coronavirus infections. She has been sleeping in her Toyota Prius, and has no idea whether her house is still standing.
Vacaville, a city of 100,000 people between Sacramento and San Francisco, is one of the hardest-hit.
"We are experiencing fires, the likes of which we haven't seen in many, many years," Gov. Gavin Newsom said. 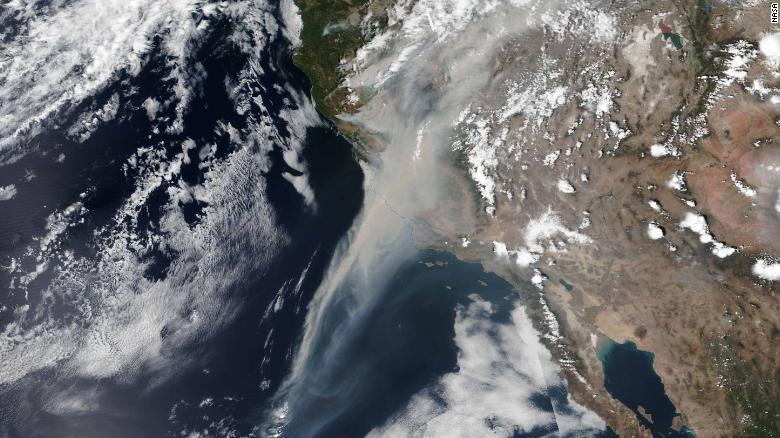 Smoke from the California wildfires is seen stretching some 600 miles off the coast in a NASA satellite image Wednesday.

Statewide, there have been more than 360 recent fires -- most of them sparked by lightning. Several of those fires spread due to high temperatures, inaccessible terrain and limited resources.
The 22 major blazes still burning have scorched a total of 660,000 acres across the state, said Daniel Berlant, assistant deputy director of Cal Fire. They have destroyed or damaged 660 structures.
They include two major fires -- the LNU Lightning Complex and the SCU Lightning Complex -- both a combination of several blazes burning in the same area. By early Friday, they had torched 215,000 acres and 157,475 acres, respectively.
California wildfires have caused more deaths and destruction so far this year than all of 2019. All of last year, they charred a total of 260,000 acres and killed three people in the state, according to Cal Fire.
Several global air quality monitoring websites show that the air quality levels in the Bay Area of California are worse than anywhere else, including locations generally regarded as having the poorest air quality such as India and eastern China. 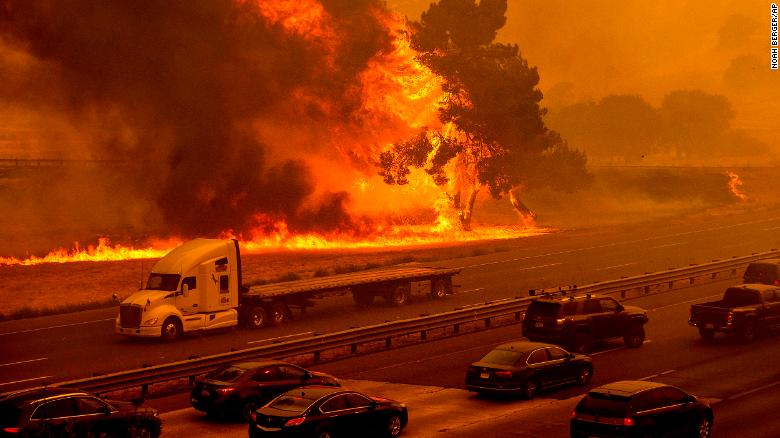 At least four deaths were reported Thursday as a result of the LNU fire -- the largest burning in the state. It consists of at least 11 smaller fires stretching across five counties in Northern California.
Three of the deaths are from Napa County and one is from Solano County. In addition to the fatalities, four others were injured, Cal Fire said in a statement Thursday.
On Wednesday, a helicopter pilot who was making water drops on the Hills Fire in Fresno County died in a crash. It's unclear whether the pilot's death was included in the four fatalities. CNN has reached out to officials. 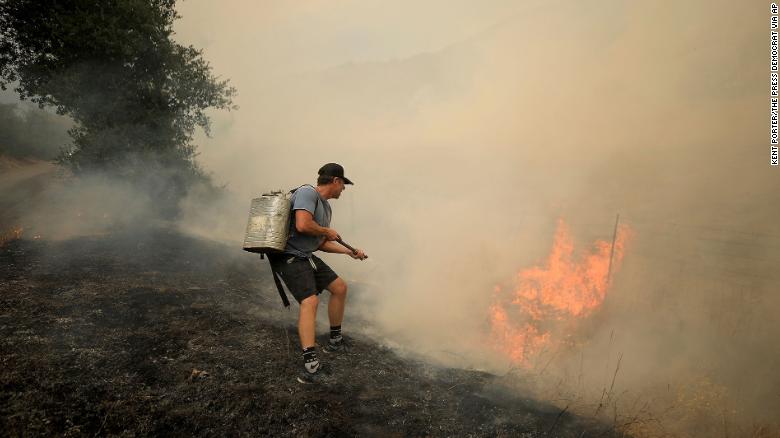 More than 28,000 people in San Mateo and Santa Cruz counties have evacuated because of the enormous CZU Lightning Complex Fire, according to Cal Fire. That fire has burned 48,000 acres
The nearby University of California, Santa Cruz, is calling for a voluntary evacuation.
"We have been encouraging those who live on campus to proactively leave if they have a safe place to relocate outside of the area," it said in a statement. "It is critical that we continue to do so to decrease the number of people on campus that will have to be evacuated if and when a mandatory evacuation is issued for our campus."
Fire officials have said they don't have an exact number on how many people have been told to leave their homes.
The top priorities are the safety of the firefighters and the public, evacuation planning, and the protection of structures and infrastructures, Cal Fire Operations Chief Chris Waters said.
Follow wildfire updates live

As if the pandemic, wildfires and scorching heat wave weren't bad enough, some Californians have lost electricity as the state's power grid struggles to keep up with demand.
Rolling blackouts were implemented over the weekend when an intense heat wave caused record-setting temperatures across the state, including a high of 130 degrees in Death Valley on Sunday.
Gov. Gavin Newsom demanded an investigation into the power outages, which he said are unacceptable.
"These blackouts, which occurred without warning or enough time for preparation, are unacceptable and unbefitting of the nation's largest and most innovative state," Newsom wrote in a letter to the California Public Utilities Commission and the California Energy Commission.

The wildfires are a result of climate change

Experts have warned that wildfires fueled by the climate crisis will be the new normal in California. Warm-season days in the state have increased by 2.5 degrees since the early 1970s, according to a study published last year in the journal Earth's Future.
"The clearest link between California wildfire and anthropogenic climate change thus far has been via warming-driven increases in atmospheric aridity, which works to dry fuels and promote summer forest fire," the report said. 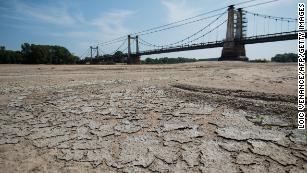 Last decade was Earth's hottest on record, exposing grim reality of climate change
"It is well established that warming promotes wildfire throughout the western US, particularly in forested regions, by enhancing atmospheric moisture demand and reducing summer soil moisture as snowpack declines."
Park Williams, the study's lead author and a professor at the Lamont-Doherty Earth Observatory at Columbia University, said human-caused warming of the planet has caused the vapor pressure deficit to increase by 10% since the late 1800s, meaning that more evaporation is occurring.
By 2060, he expects that effect to double.
"This is important because we have already seen a large change in California wildfire activity from the first 10%. Increasing the evaporation has exponential effects on wildfires, so the next 10% increase is likely to have even more potent effects," he told CNN last year.

Dozens of fires are burning nationwide

Over 11 million people are under an excessive heat warning in the Southwest, CNN meteorologist Robert Shackelford said. Triple-digit temperatures are possible in all these areas with temperatures still above average, he added.
While the West is suffering record-breaking heat, wildfires are ravaging many parts of the US -- with red-flag warnings issued from the Northwest into the Rockies.
At least 86 large wildfires are burning in 15 states nationwide this week -- almost a third of them in California, according to the National Interagency Fire Center.
The fires have burned a total of 879,039 acres. In addition to California, some states with multiple fires include Arizona with 12, Alaska with seven, and Colorado with five.